The Truth Behind Travel Deals 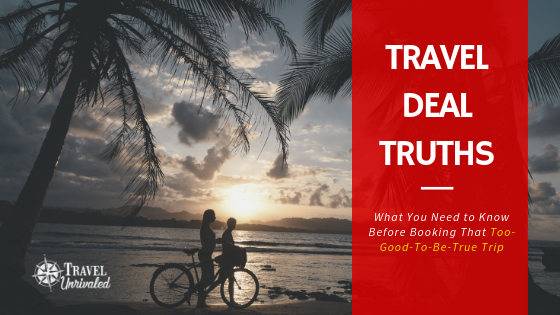 Picture it: You’re overworked, overstressed, underpaid, and nearing your breaking point.  As if some higher power understands your desperate plight, you’re scrolling through social media when an ad pops up that seems custom-curated for you.  It’s 5 incredible nights of rest and relaxation in a bucket-list location.  And all that (including airfare) at a rock-bottom rate that’s less than your monthly car payment.  We’ve all been there, did a double-take on that.

It’s the deal that seems just too good to be true.  Especially when a quick google flight search returns airfare rates higher than that of the entire trip.  It’s the kind of conundrum that leaves you scratching your head and wondering if maybe you shouldn’t have already started packing your bags.  So, what gives?

Here’s one example of a recent travel promotion we came across.  Take a look at what the ad says:

Here’s the scoop on what those rates really mean, and the terms and conditions that you didn’t read finally decoded.

Consider these bullets before you book:

Re-read it knowing what you know now and see if your overworked brain was just filling in the details with what you wanted it to read. Upon closer inspection, you see that they’re saying a lot without really saying anything at all.

Beware the ‘Bait and Switch.’ The fine print states that the offer is subject to availability and has the potential to be discontinued without notice.  So, maybe they only have one or two rooms at this price.  Then, this promotion becomes a hook to get you to call, and them the opportunity to get you the “second best deal” at a higher price.

When you get behind the wheel in another country, you must remember US laws do NOT apply. A popular trail of trickery is when someone “accidentally” bumps your car, someone claiming to be the police pulls up, and requires you to pay a fine to avoid further penalty and/or jail time.  Of course, they know you’re likely to pull out your wallet and pay up when forced between a rock and a car ding.

Finally, getting you into a ‘cheap-as-chips’ trip is a small price to pay for a time share company looking to rope in possible new recruits. And as reputation goes, their ruthless tactics can go a long way to ruin your rest and relaxation.  So, scour the fine print twice to make sure no mandatory presentations are required to redeem your deal.

Simply put, the devil is in the details.  And as your mama probably told you many a time growing up, “If it seems too good to be true, it probably is!”